The National Audio Show is now in its fourth year at Whittlebury Hall (near Silverstone race circuit), which is a confusing maze of a venue, but one that certainly seems to be well run.

Speaking to exhibitors gave wildly differing opinions of the shows attendance and success, but certainly when we were there (on the Sunday) it seemed very busy which is promising in such dark economic times. The biggest moan from visitors seemed to be about the high entrance cost, but as charging a fee for a hifi show is a pet hate I wont go on about that here. The addition of a separate headphone area was something of a master stroke, it was jam packed whenever we visited.

What follows is by no means an exhaustive review of the show, it’s just a few random things that I found interesting. Naturally any comments made about sound should be treated with a pinch of salt, invariably it’s very difficult to make a good sound at a show and it’s not always possible to sit in the ’hot seat’ when rooms are busy, add in often unfamiliar recordings and room acoustics and you’re really not able to tell much at all.

Talking of room acoustics, one thing that was incredibly obvious throughout the majority of rooms was how appallingly bad the bass was, with great uneveness, softness and boominess in evidence, that it quickly became clear that this must be a problem with the construction of the rooms. This ‘Whittlebury Waffle’ as I’ll call it seemed mainly to afflict the rooms on the first floor, but even some downstairs exhibited the same problem. One manufacturer we spoke to who had measured his room said that he had a dip that was ‘off the scale’ at 100Hz, and sure enough the bass sounded very odd, as you’d expect.

Anyway, enough of my waffle, here’s the highlights I saw (in no particular order) 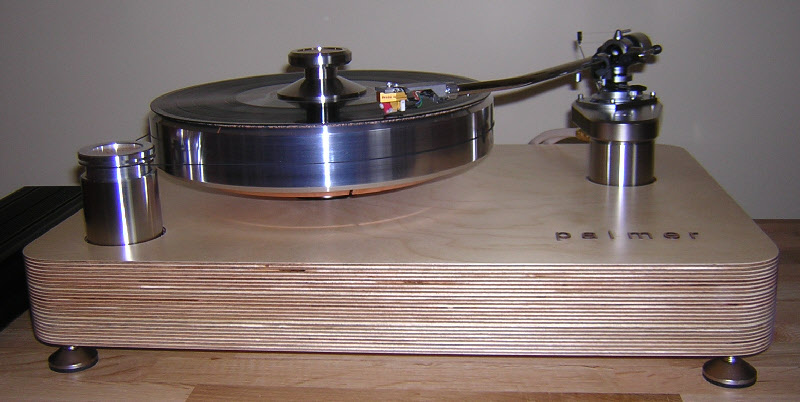 I’ve been following the Palmer Audio turntables with great interest for the last few years, and the new Palmer 2.5-12 was on demonstration and featured quite a few refinements from the previous model I’d auditioned. I didn’t catch the whole list of upgrades but it included changes to the bearing and a large copper piece fitted to the underside of the platter (just visible on the picture above). 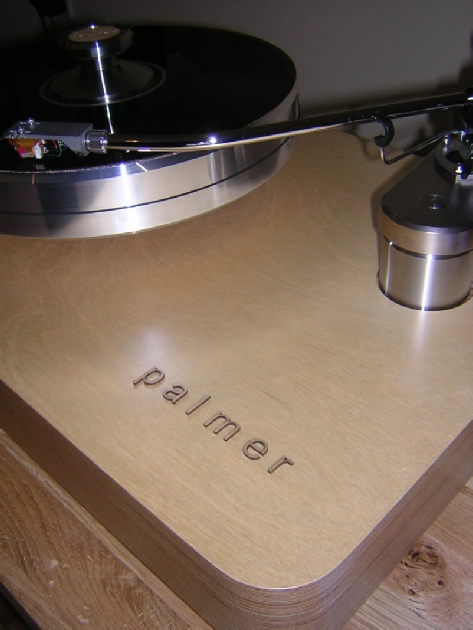 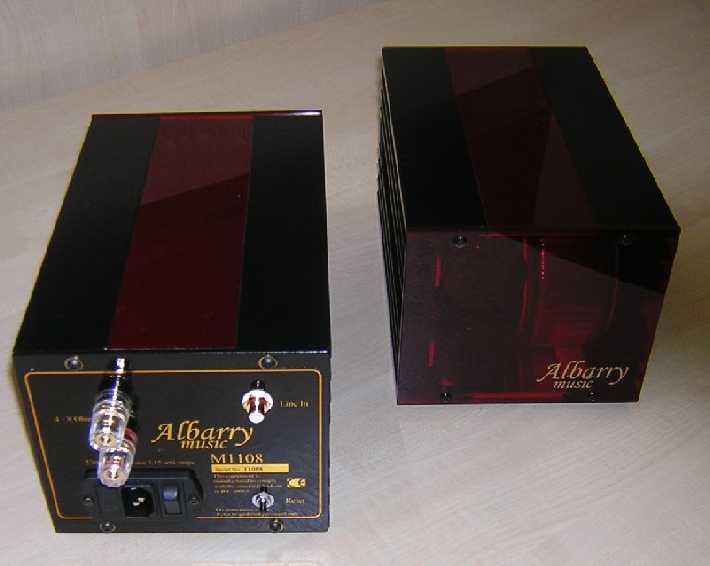 I have a bit of a soft spot for Albarry amplifiers so it’s great to seem them being reintroduced, and delighted that their classic styling has been left alone - it’s a love it or hate it design but one that’s instantly recognisable. 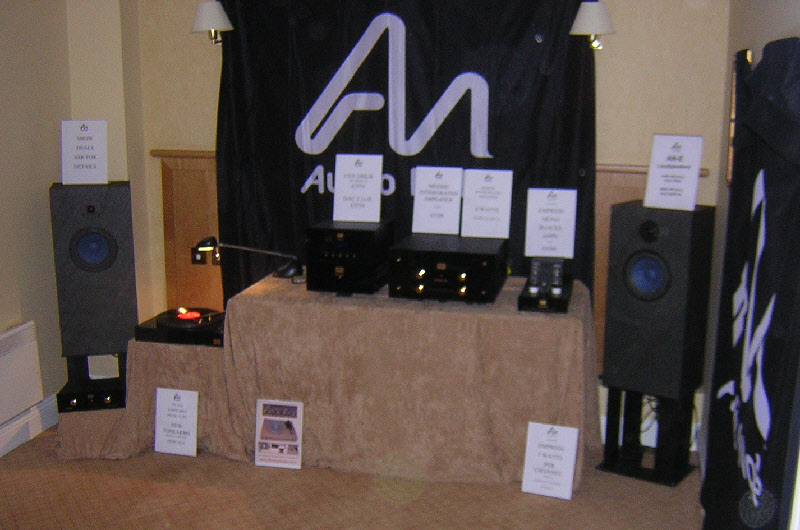 Even though we are dealers for Audio Note they invariably surprise us with new products at the show. This time it was a new finish on the AN-E speakers, unfortunately this was very difficult to photograph in the very dark and small room.

From what I understood, the slate is very thin (circa 1mm thick) and glued onto the plywood cabinet beneath. Whilst it was difficult to inspect them too closely the finish looked very impressive (if you like that sort of thing) and I couldn’t find any joins at the edges. I can’t help thinking the finish doesn’t help diminish their slightly imposing nature, but I’m sure in the right room it could look very striking. 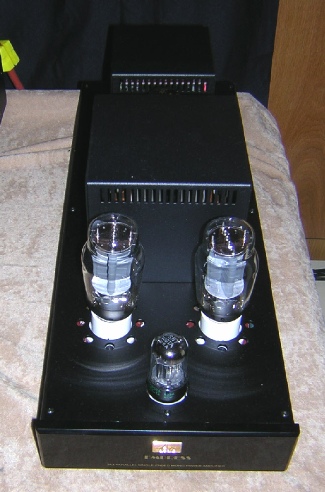 On display was the new Empress monoblocks, these use two 2A3 valves per channel in parallel single ended topology to produce about 7 watts. The top plates on the lower series Audio Note amplifiers are now made from aluminium rather than copper, and are available in the black finish shown above or a brushed aluminium.

The B&M (Backes & Muller) room was absolutely packed, so their active speakers were clearly generating a lot of interest. For me the look of their BM ICE 802 preamplifier really stood out, it was difficult to photograph well, but hopefully you can see in the picture below that it’s made with a frosted acrylic finish. It has a bizarre effect on the eye that almost makes it feel like you can’t focus upon it. 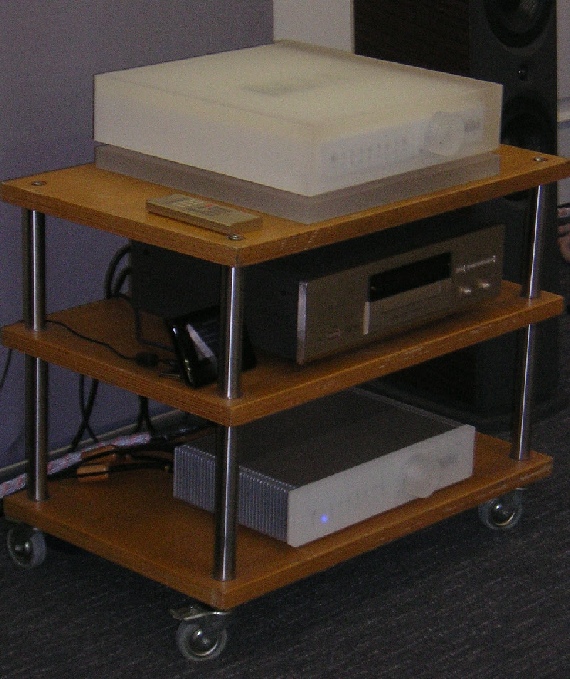 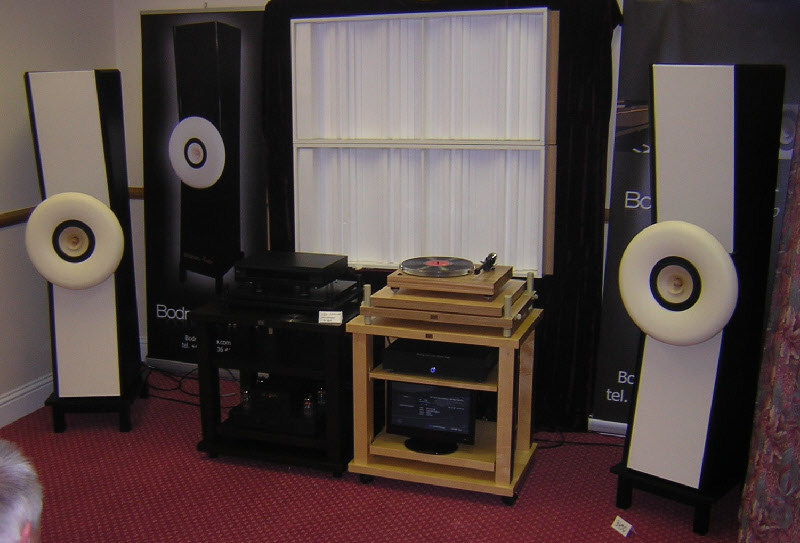 From Poland, Bodnar Audio’s oddly named Sandglass Fantasy speaker was sounding very interesting. Based around an 8“ full range driver, running into a backloaded horn this speaker was doing things that many outwardly similar speakers struggle to do, off axis the response through the mid and high frequencies was consistent without the obvious peaks and troughs that can affect many other efficient full range speakers, and the bass was very nicely extended, full and fast. 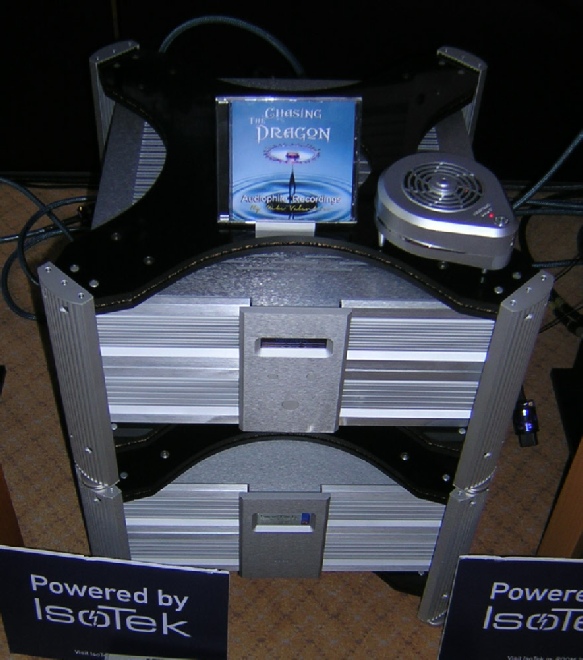 Isotek showed their £13,000 Evo3 Genesis mains regenerator, apparently I missed this at the Bristol show earlier this year. I’ll admit to not having got on well with regeneration for use on amplification in the past, but if I get the chance it will certainly be interesting to see how this one performs. 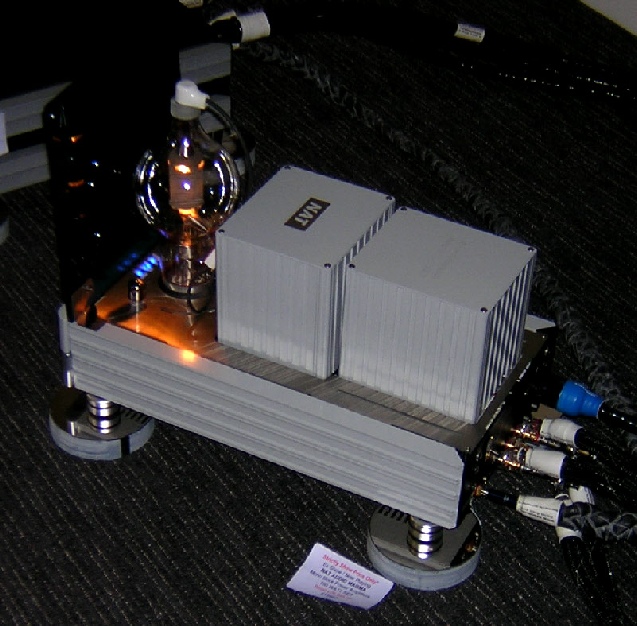 NAT Audio were demonstrating what they claim is the highest powered single ended amplifier on the market, and at 160 watts from a single 450TH valve that’s probably true. You can’t see the scale of the amplifier in the picture above, but the output valve alone is a foot tall. 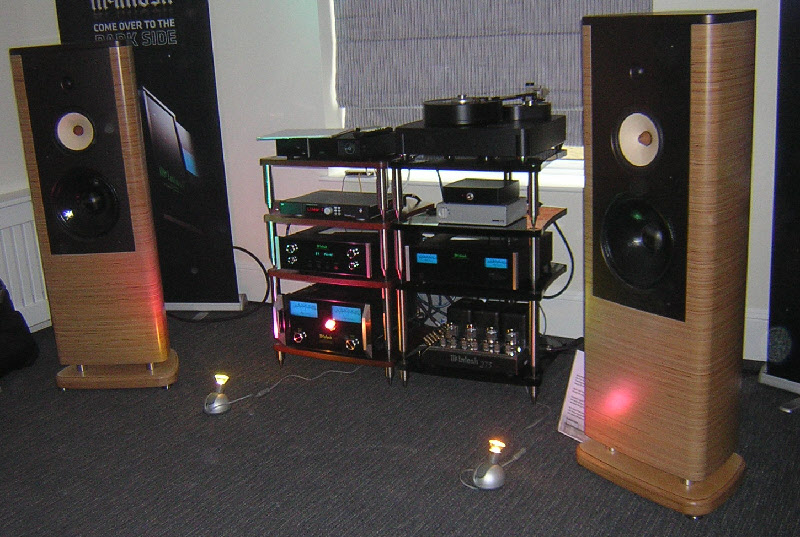 ART loudspeakers showed their new Alnico range, named after the choice of magnet material on the drivers. The cabinets are made from laminated plywood which is an excellent material and the sound had impressive tonality and texture on my very brief listen. 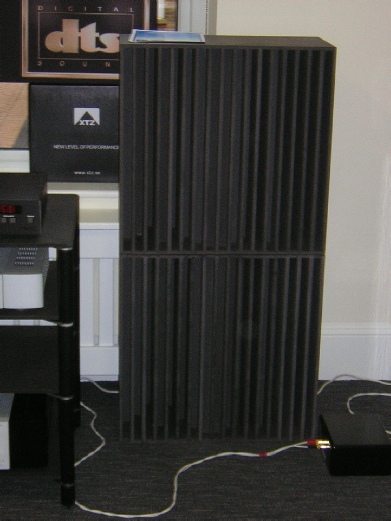 Advanced Acoustics showed their new QFD Diffusor, which, as the name implies, is designed to diffuse rather than absorb sound. They’re made from self coloured mdf (which can be painted over if desired) and I suspect it could prove to be a very useful addition in many listening rooms. 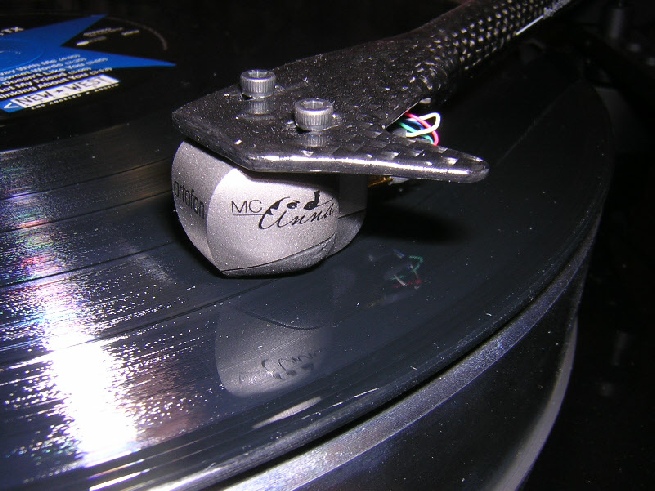 Ortofon’s new flagship MC Anna cartridge was, I believe, making its debut on these shores. Priced at £5,000 and named after the opera singer Anna Netrebko, it is a real tour de force featuring a titanium body made using their SLM (Selective Laser Melting) process which allows them to weld titanium particles together layer-by-layer to construct a single piece body. 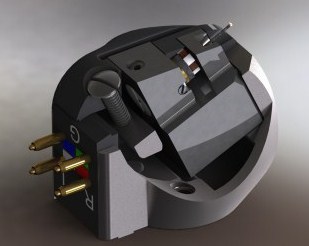 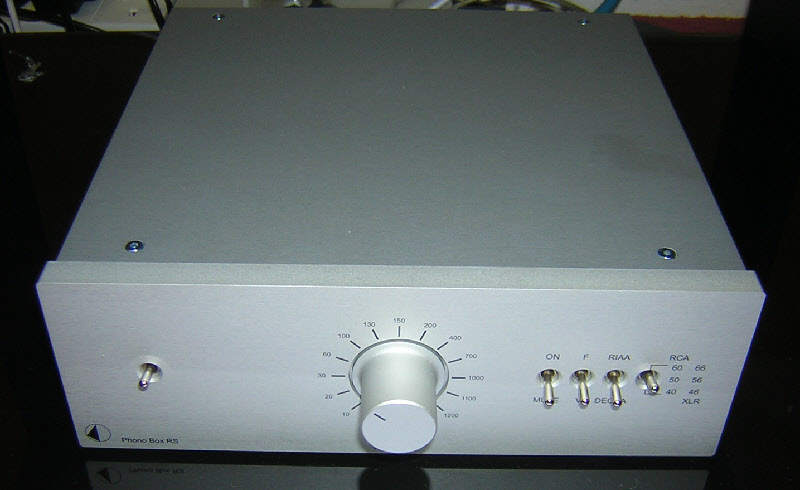 Henley Designs showed the new Pro-Ject RS range which I thought looked very interesting, especially the Phono Box RS. This is expected to sell for £600 and features RIAA and Decca equalisation as well as infinitely variable loading from 10 to 1200 Ohms, adjustable gain and balanced ins/outs. The case measures just 20cm wide and is available in silver and black (see below) 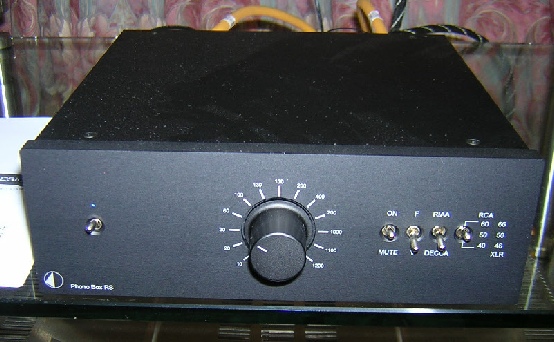 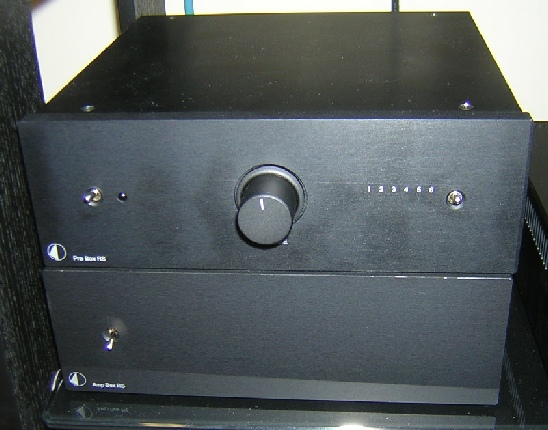 Also in the same RS range is a pre/power in the same sized casework, pictured above. The power amplifier is a 110 watt class D design, and the whole range (including phono stage) can be upgraded by fitting an optional linear power supply in place of the switch mode supplies they’re supplied with as standard. 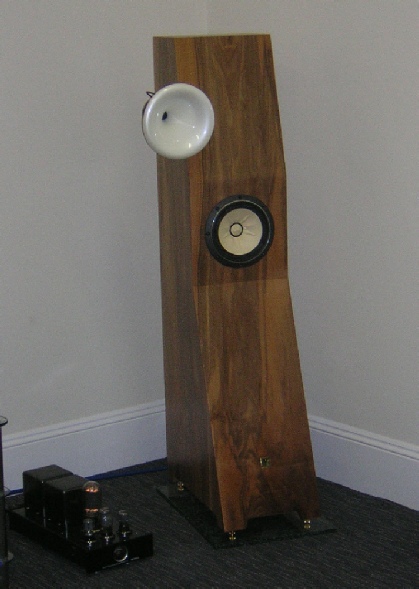 The Tune Audio Marvel is an interesting speaker design which combines a back horn loaded ‘full range’ Fostex driver with a horn loaded tweeter. They were being played with Ming Da Electronics but unfortunately appeared to be suffering very badly from poor room acoustics, which was a shame as I’ve been quite keen to hear what this interesting speaker brand is capable of.