The Bristol Show is always one of the busiest in the UK and whilst it seemed a little quieter than previous years, the attendance was still very good. This show has always had a lot of Home Cinema and some install products, but this year they were noticeably in decline, with more two channel Hifi in evidence.

What follows is less of a conventional report and more just captioned images, which are in no particular order and just reflect my random meanderings through the hotel. 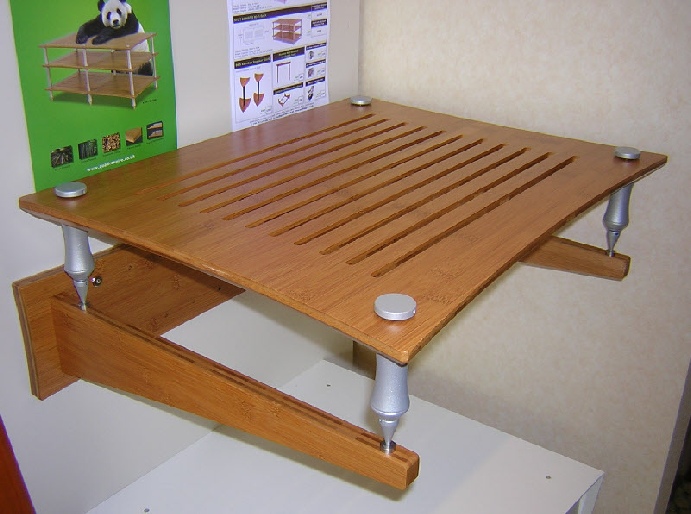 Quadraspire are now offering Bamboo shelving throughout their range of equipment supports. This fascinating materials has a lot of properties that make it extremely attractive for this sort of application and I’d expect a decent improvement in performance over the normal mdf shelves.

Their new all Bamboo and Aluminium wall shelf (shown above) was also a very welcome addition to the range. 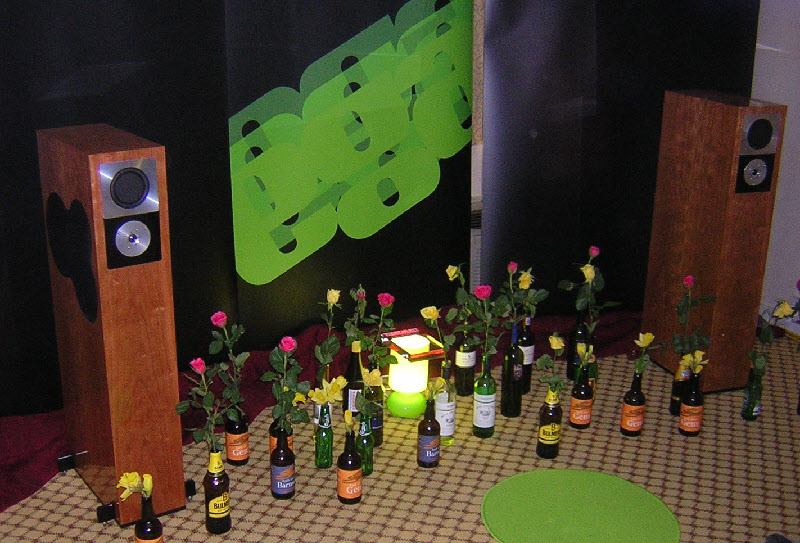 Rega showed their new RS10 speaker, which will briefly be their range topping model at an anticipated £8,000 cost (until the flagship model is launched later on this year). It has an unusual driver line including a BMR drive unit and a tweeter (most manufacturers using the BMR technology are using its extended high frequency response to dispense with the tweeter altogether). They sounded quite promising considering the tiny room they were in, although there is something nagging me about the presentation of all BMR based speakers I’ve heard so far, which hopefully longer exposure in more familiar surroundings will confirm if it’s simply the ‘shock of the new’ or something ultimately more intrusive. 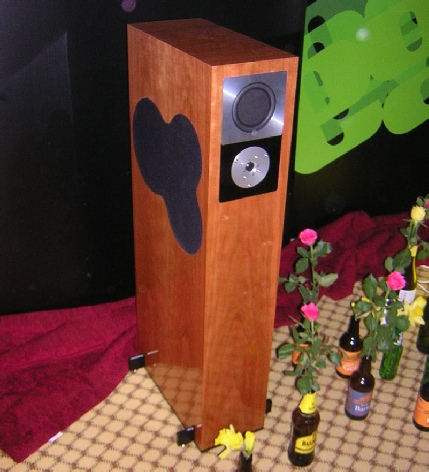 Below: I couldn’t resist a photo of their multi coloured plinths stacked in the corridor 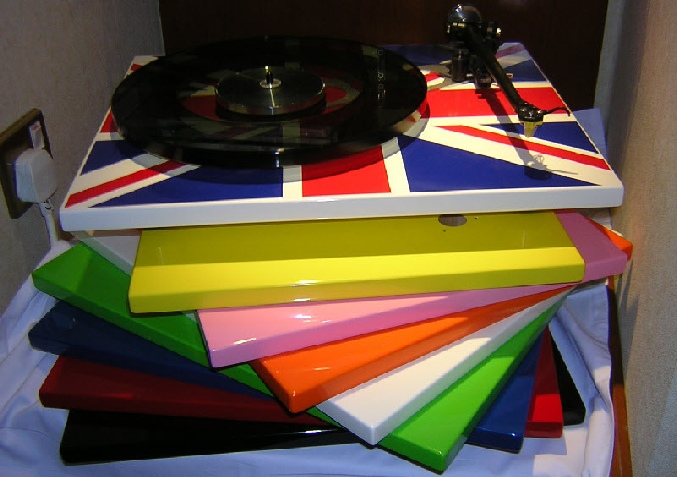 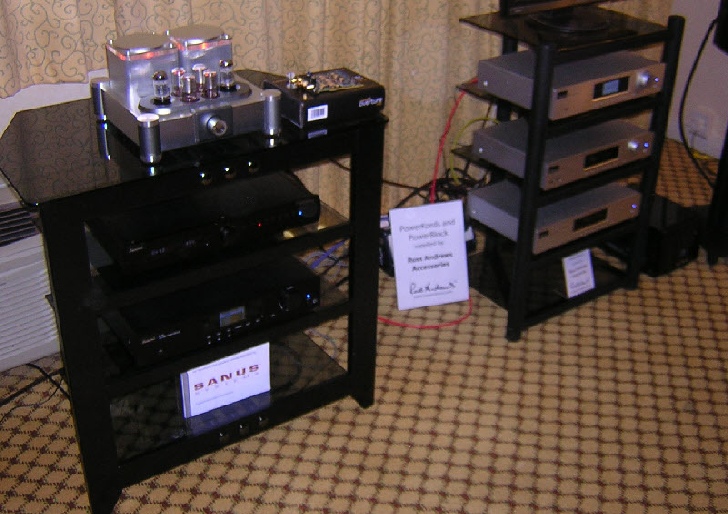 Sansui are making a welcome return with a diverse product range, including a mini system (pictured below), integrated amplifiers with onboard DACs (there’s even a valve hybrid model), a CD player and even a soundcard. 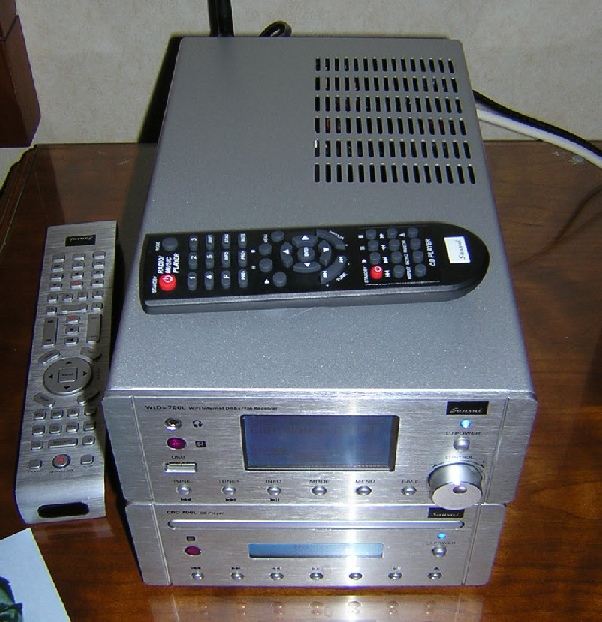 Also on display in the same room was some rather intriguing valve hybrid items from Mitchell and Johnson, including a very neat miniature system shown below. If the price I heard was correct then this could be a very nice addition to the market. 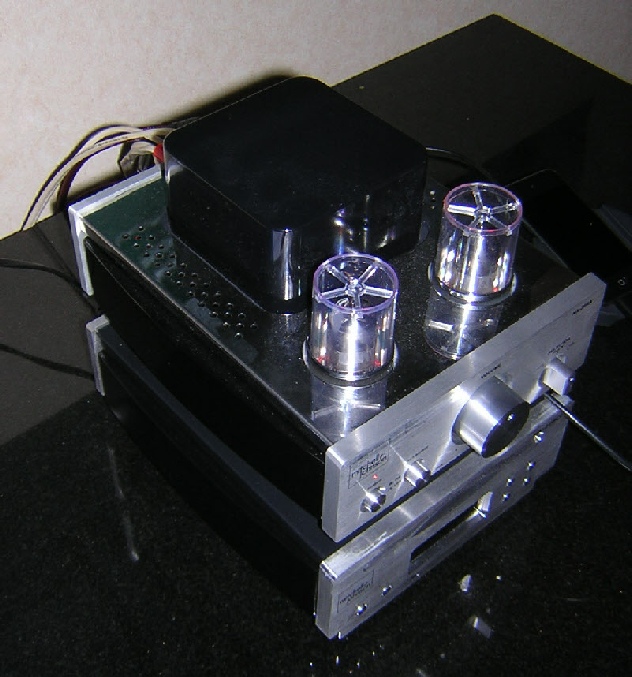 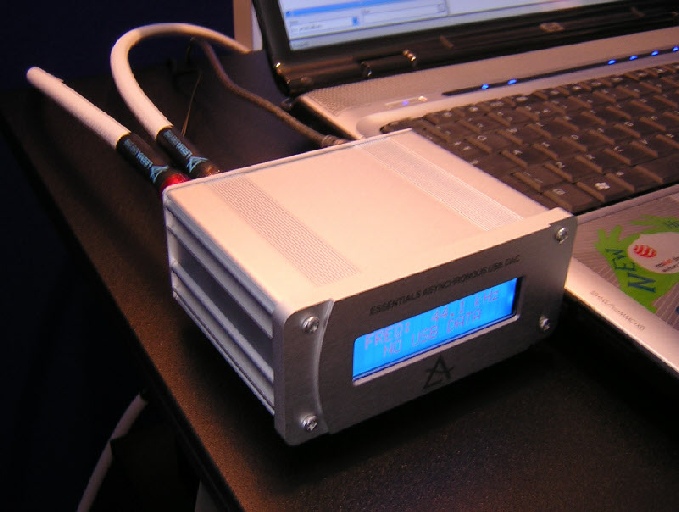 Way up on their own on the 10th floor were Leema. They showed both their new range of cables (made in partnership with Chord Cables, and visible in the picture below) as well as their new £500 Essentials USB DAC. 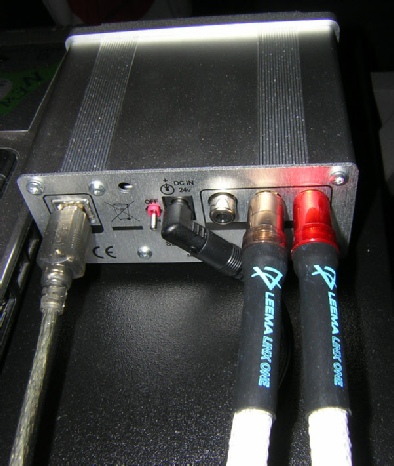 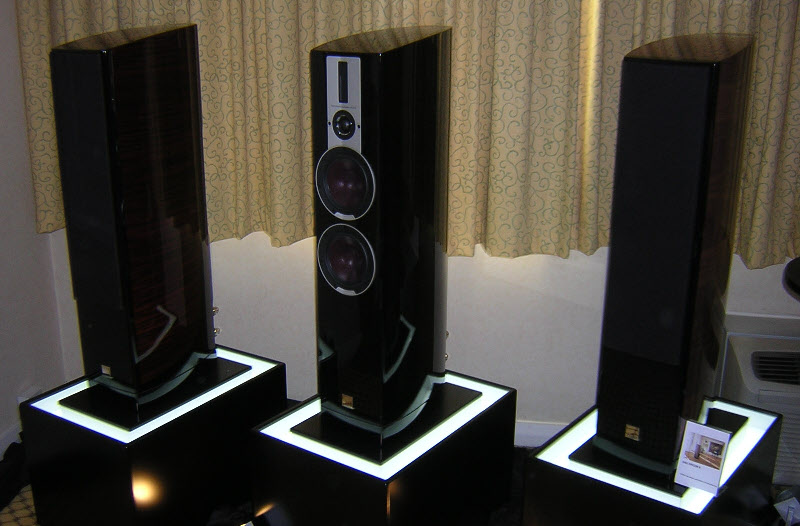 Dali were showing their new Epicon 6 floorstanding speakers, which are priced at just under £8,000 and available in three high gloss finishes (walnut, ruby macassar and black). 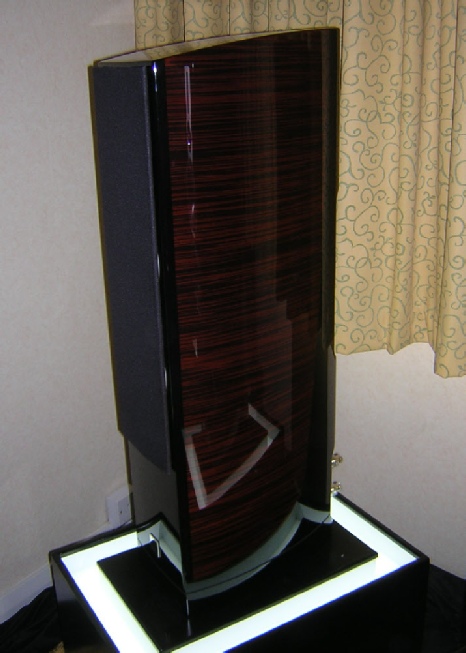 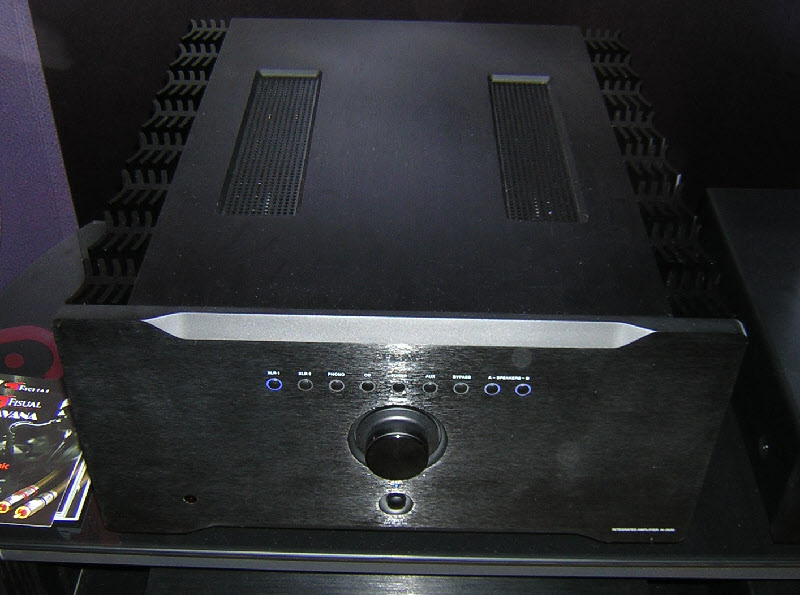 Perhaps the biggest surprise of the show to me was the new Distinction range from Teac. This series aims to span the gap between their core range and their flagship Esoteric series, and appears to offer very impressive value for money. The Distinction 1000 SACD/CD player and amplifier (on the right in the above image) cost £800 each, and the Distinction 3000 SACD/CD and amp cost £1,500 and £2,000 respectively. The amplifier really stood out, it’s incredibly well finished and quite simply massive (over half a metre deep and over 30kgs in weight). To see if the sound matches up to its hi end appearance I have acquired one which sitting on the floor in front of me as I type this, so once I’ve summoned up the energy to heft it onto the rack I will give it a listen. 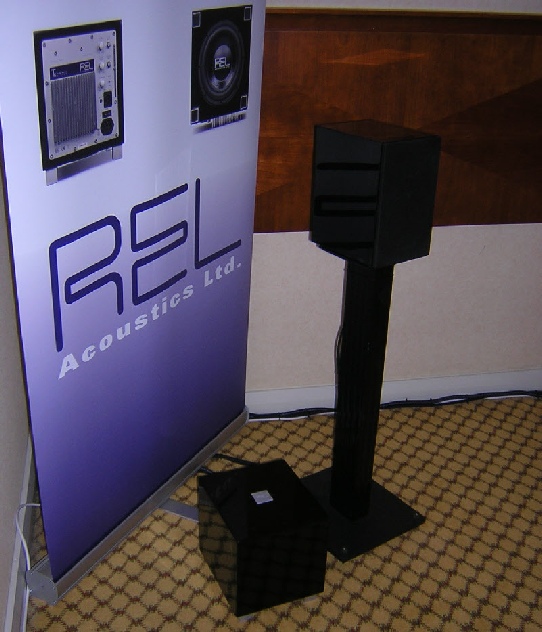 REL showed their new T Zero sub woofer, which was surely their smallest design to date at just 22 x 24 x 26cm and priced at just £350, in white or black finishes. With a -6db point at 38Hz this should add a decent amount of weight and scale to smaller speaker systems. 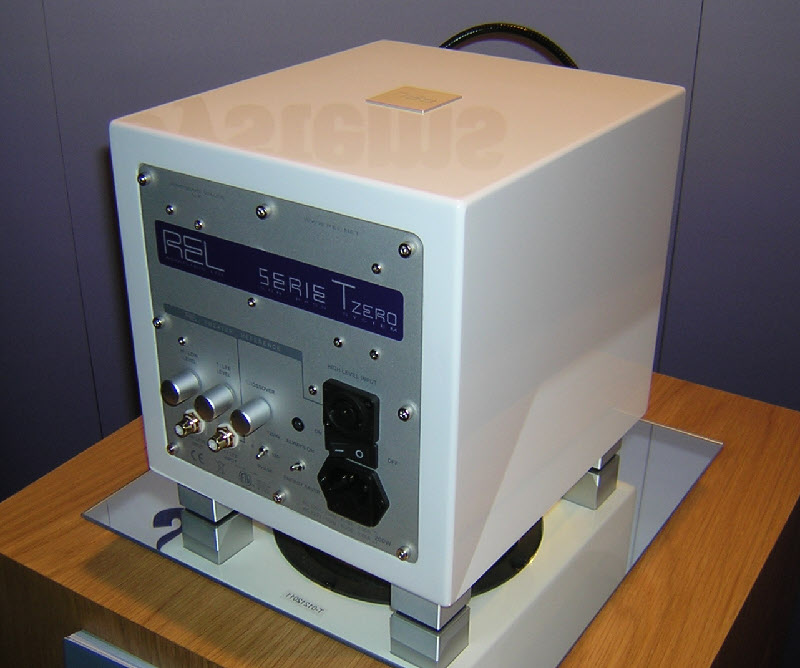 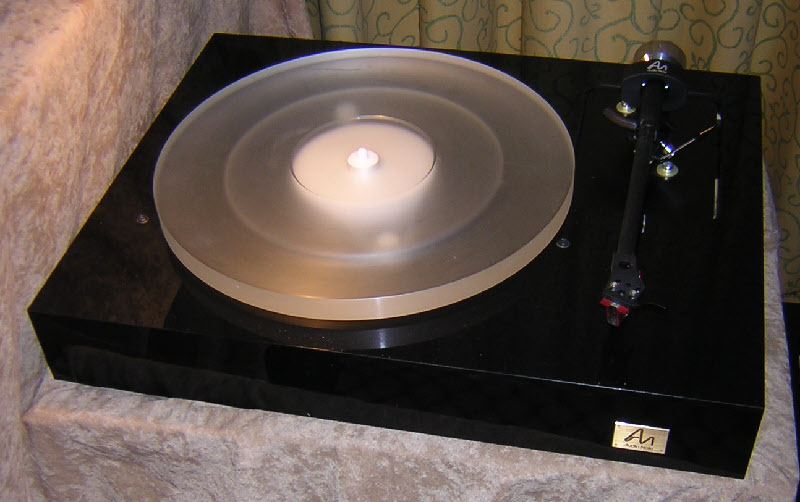 Audio Note were using a very pretty gloss black version of their twin motor TT2 turntable, which was with an Io 1 cartridge and playing through a Meishu amplifier and a pair of AN-Es speakers.

Edwards Audio had bought along several new products, many of which are already detailed on our website, but amongst those making their debut included the £1,200 Tornado 3 class D power amplifier (which I snaffled at the end of the show and am listening to right now), the £1,000 MC2 phono stage and the £550 SP1 speaker. 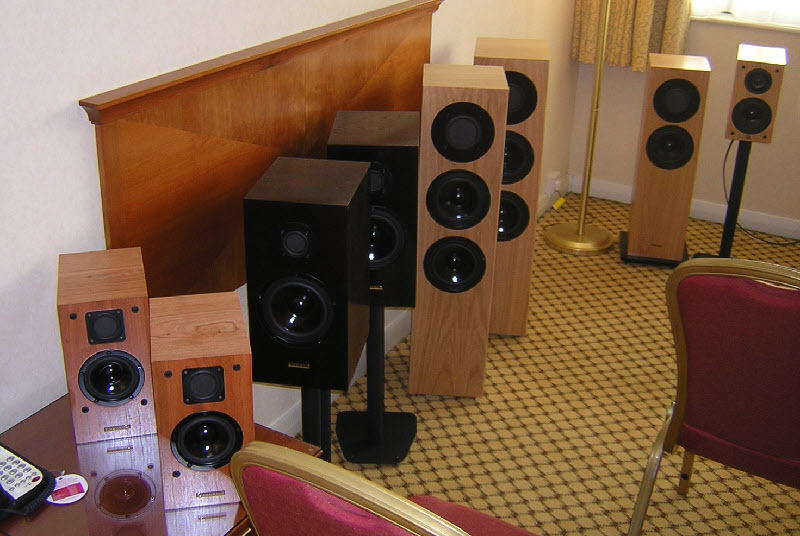 Sharing the room with Edwards Audio was Accolade loudspeakers who bought their new range of four speakers all using BMR drive units to cover the upper frequencies. Spanning prices from £720 to £2,500 these speakers were producing impressive bass weight from comparatively small boxes with very good transient response. In the far right of the above picture is the Edwards Audio SP1 mentioned above.