It’s rather a long one this, best grab a cup of cocoa first or simply scroll down to the pictures... 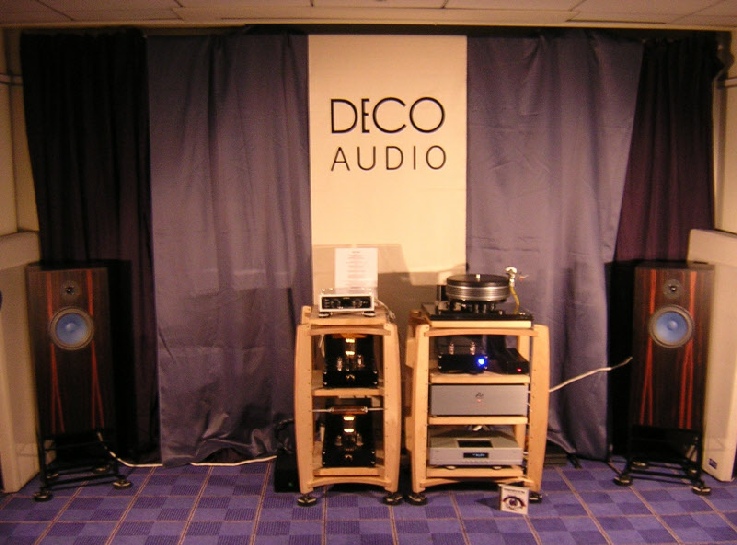 Shows are always viewed with equal parts enthusiasm and loathing. They’re surprisingly hard work, getting the right system together, making sure you don’t forget anything. Planning for every eventuality. Given we only booked the show a few days beforehand, everything seemed to be going to plan. Neither of us thought to bring a pen...

We arrive to find the ceiling is 10cm lower than promised, this is a bit of a setback, Mark has specially welded some supports for the curtain, some improvisation later and judicious use of cable ties sees us with a back drop. We forgot to iron the curtains, ah well, we’d intended to keep the room dark so we figure this’d have to do.

The system we bring with us has the following parts: 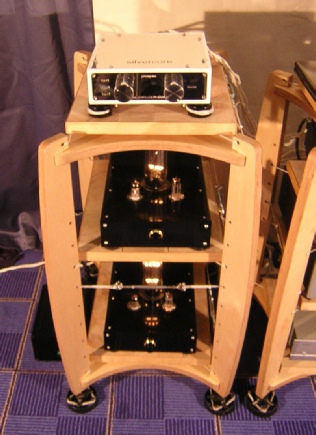 Lurking to the left is the prototype Heretic Audio Isolator which is used on the digital front end, the racks are Heretic Audio and all equipment feet are Something Solid Missing links, Dissipating feet and Little Links.

Supports are the same as above, the Audio Note S1 step up transformer is on the floor behind the rack. Mains cables and Distribution are mainly our own Deco Audio models, with other power cables including a smattering from Rega and an Audio Note Sogon.

Audio cables are Heretic Audio Silver Sanctuary for both interconnects and speaker cables, except for a shielded Atlas Ascent between step up and phono stage.

Speakers are Audio Note AN-E HE Spe on Something Solid XFII stands with Missing Link feet.

On static display we had Play and Display record frames, an Edwards Audio MC3 as well as Croft and Pure Sound products. 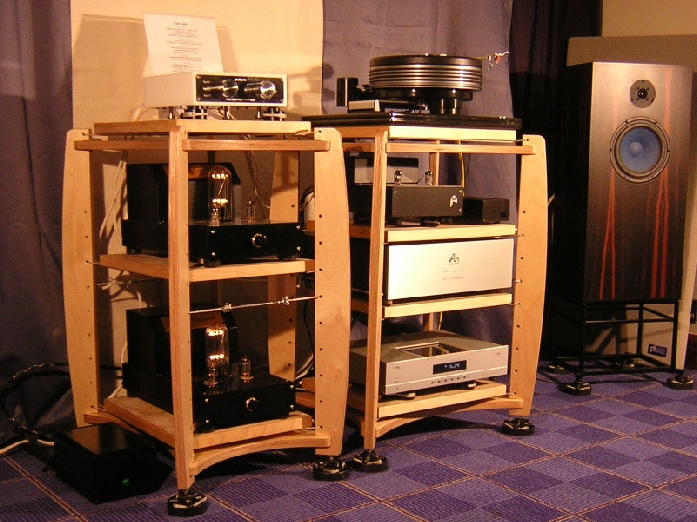 System unpacked and setup quite easily. The room is horrible. Now I know we all always moan about the rooms at shows, but this one was the end of the corridor and the neighbour to our left was a fire escape. The wall was paper thin. You could probably see through it if you tried hard enough. The speakers we were using love corners, everything falls into place once they’re snugged up against rear and side wall but when one is made with tissue paper this becomes a problem. Thankfully one of the acoustic panels we brought along acts as an extra boundary and we’re away. This of course leaves us with a rather more lively room than hoped for as we don’t have enough panels to make it emulate the average listening room, but considering everything we find the sound not as objectionable as we started with.

A quick dash back to the shop first thing in the morning to get some more panels to try to reduce the flutter echo, not quite enough will fit in the car, but it helps and means the front of the room sounds much better, the back still a little too live, but livable with. Ceiling tiles sing along to anything with bass, so make a mental note not to play anything that plumbs the depth.

Despite being furthest away from the entrance the room gets busy quite quickly, with a larger turn out than the doomsayers would have had us believe, our room stays busy to full throughout.

First day of wandering about and after perusing LPS I neither needed or had room for I headed first into Jo Sound, proudly proclaiming to be Jerseys only hifi brand. Although when pushed admitted the cabinets were made in Swindon. Was that really what he said? Could have been Sweden, maybe I misheard, but then he added that he tried hard to make as much as possible in the UK, so Swindon it must be. 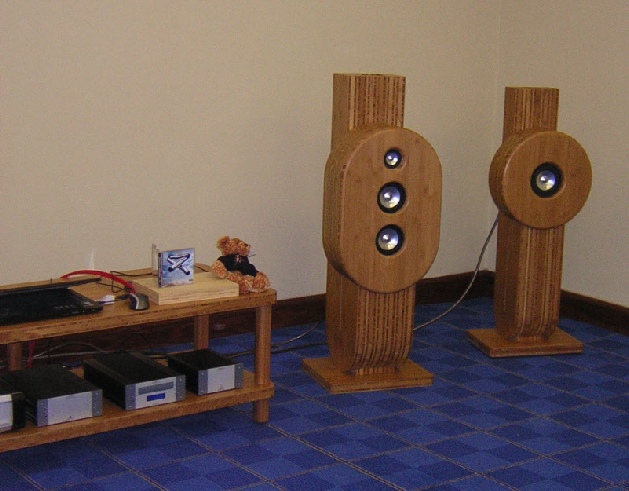 The cabinets were quite stunningly finished, the look may be an acquired taste but there’s no doubting the care and attention that went into them, the cabinets made from bamboo, apparently designs using recycled newspaper are being considered. I tried to think of a joke about it being old news but thankfully thought better of it. 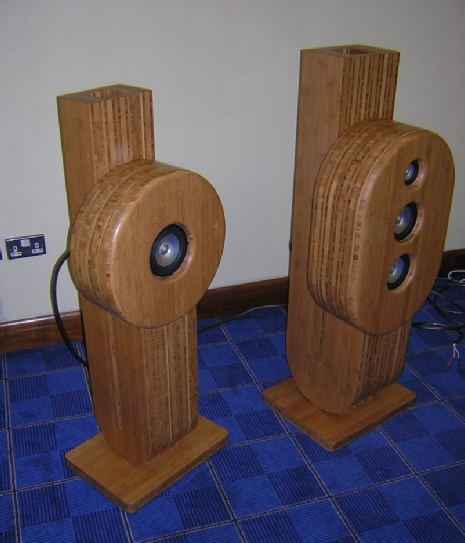 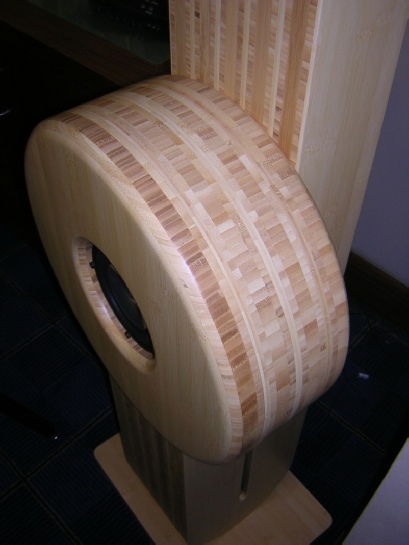 The speakers used Jordan drive units, they are transmission line loaded which exits out of the very top of the speaker. Some appealing elements were on display, but they didn’t quite grab me, however from past experience I know the room they were in is something of a shocker sonically, and they were playing Tubular bells (which I have an allergic reaction to) so it’s hardly fair to criticise on the basis of this (I should add all comments here are only about the sound on the day, the peculiar and difficult show condition means any thoughts should be viewed only as a snapshot of that experience and not of an items actual abilities - too often I hear “‘product x’ is rubbish” based purely on a show experience, which is rather short sighted).

Onwards I happen upon the Angelsound room. Playing were some Hart Audio speakers, these 12“ dual concentric's are apparently based around a Tannoy driver that is heavily modified. Whilst they had a lot going for them, the classic big Tannoy weakness in what I call the goose bump region of the vocal register seemed present (due in part to running a large drive unit up to relatively high frequencies to crossover to the tweeter).

I happened across a few other rooms and lots of old friends, little of the former made much of an impact I’m afraid to say, neat and sanitised sounds outnumbered anything really involving. 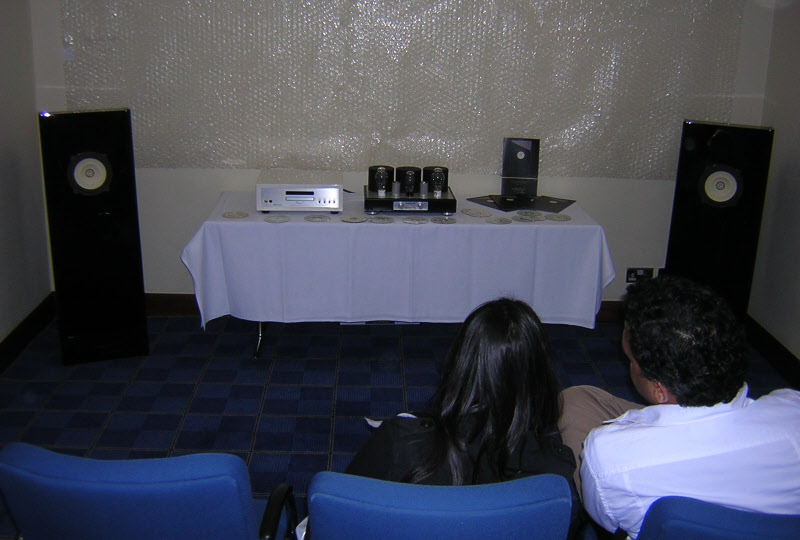 I then made a beeline for the Voxativ room, ever since I first saw this firm surface its name has irritated, clearly being an anagram of Vitavox, whose often wonderful products they neither resemble or echo. 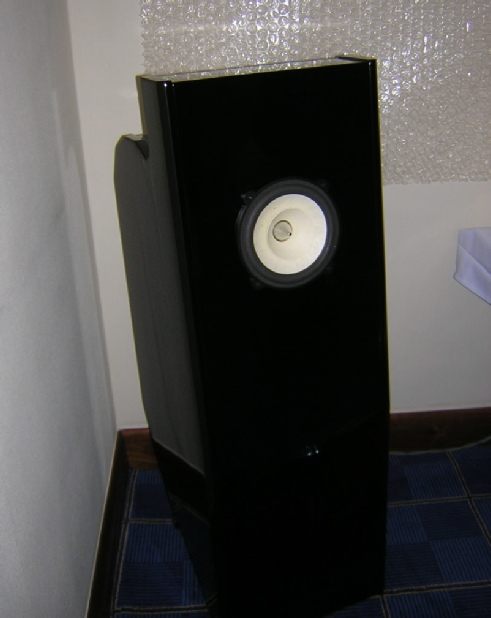 What they do clearly resemble are Lowther drivers, but I suppose Hertlow doesn’t quite have the same ring. The usual mixture of delight and aggravation greeted me. I’d been wanting to see and hear these in the flesh, and they were more civilised than many Lowther based designs, less peaky but still struggled when the music got complex. The room clearly wasn’t working for them, it was so small that almost anywhere else it would be classified as a cupboard. The cabinets were quite beautifully finished, apparently being made by Schimel, the piano makers. 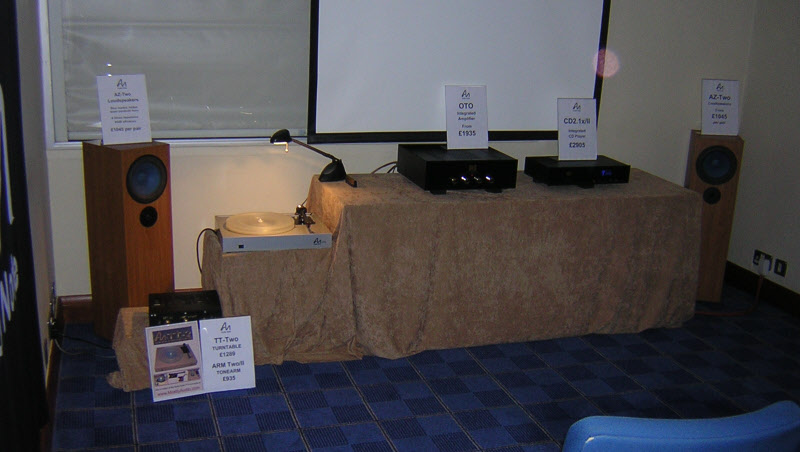 I swung by the Audio Note room and was surprised, we were expecting them to be using AN-E’s like us, they always do at this show, but instead had brought AZ-Twos. I’d have hated to clash, so this was a good thing. These much cheaper speakers were sporting the optional blue coloured drivers which are made from hemp instead of paper. This puts the price up a little, but the results based upon a quick listen certainly seemed very worthwhile. 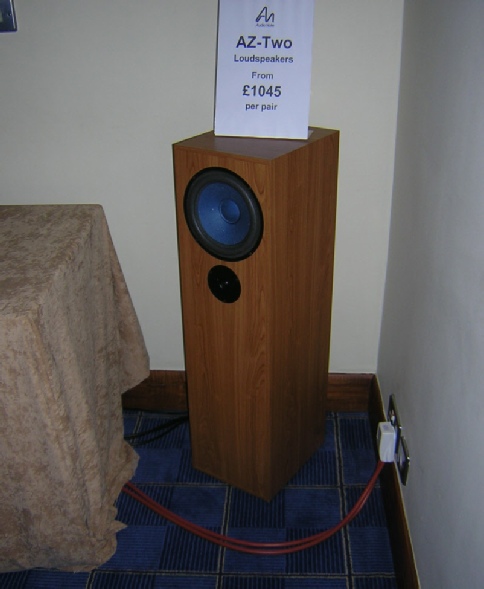 On a TT2 turntable (running from a prototype power supply) was a black Arm2, this model differed from the one in our room by having the first of the two grades of silver wire (ours was the ‘entry level’ copper wired model). 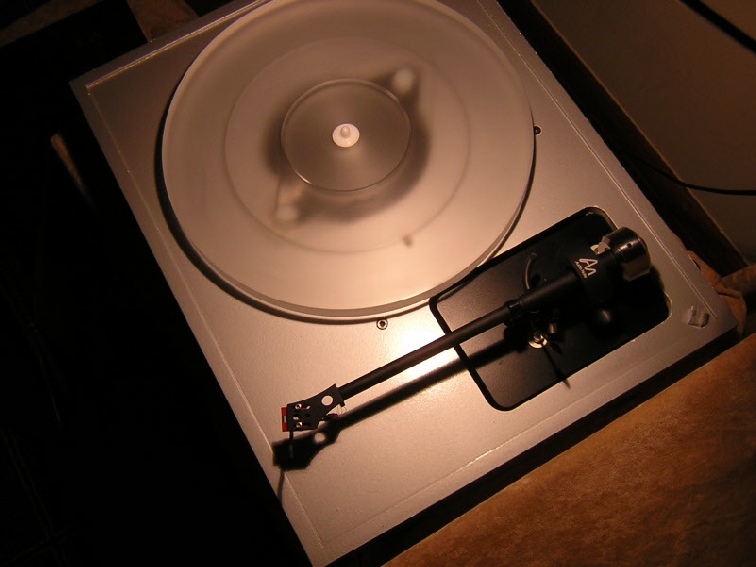 As usual good sounds emerged from the far end of the room and Mario was playing interesting music (such a rarity at shows). I could have stayed much longer but work beckoned. 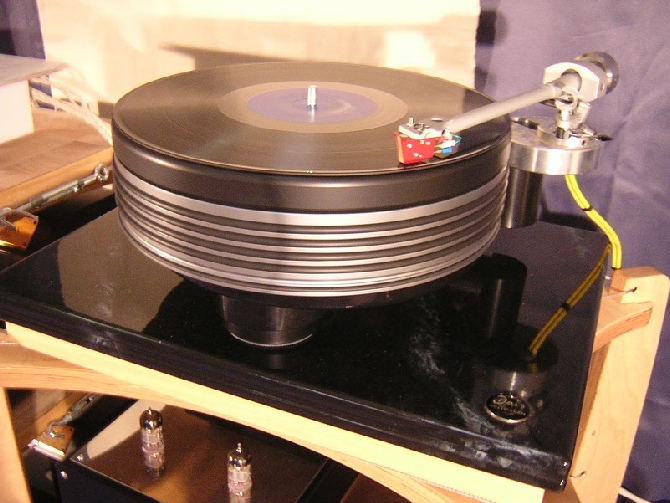 Back in our room a visitor noticed one channel drop in level, sitting in a rear corner of the room wasn’t conducive to hearing the finer things like stereo balance, so my eternal thanks to that man. Now how exactly do you fault find a setup that has many parts and cables without halting proceedings for ten minutes? The room was almost full, so the odd quick check between CDs confirmed it was before the phono stage and after the cartridge. An intermittently dicky impedance switch on the the rather well used step up transformers was suspected, we were unusually fortunate and had two replacements to hand so one was substituted (thanks to Guy of Pure Sound). This seemed to do the trick.